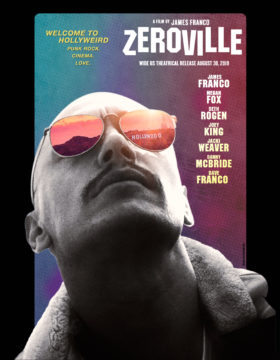 Description:
Synopsis: Vikar (James Franco), an architecture student inspired by the few films he has seen, rides the bus into Hollywood. Vikar is almost autistic (later, his friend “Viking Man” (Seth Rogan) dubs him a "cineautistic") in his interactions with the world, and is deeply affected by his childhood with his religiously oppressive father. With a tattoo of Montgomery Clift and Elizabeth Taylor as they appear in A Place in the Sun (a film that plays an important role in

In Films-list.com we have selected the most viewed movies from category - Comedy, Drama. Enjoy the best films specially selected for you! Zeroville (2019) is the right choice that will satisfy all your claims.