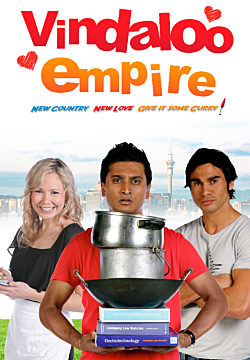 Description:
Vindaloo Empire follows the life of Sid (Aunanda Naaido), a mid-twenties boy who migrates to Auckland from Delhi, with his parents. He realizes that he is no longer as popular as he was in Delhi, and believes all he needs is a motor bike, like the one he had back home, to again catch the attention of girls. His parents (Ajay Vasisht and Leela Patel) want him to focus on his engineering studies, but Sid takes a part-time job at a struggling restaurant as a kitchen hand, without his parents knowledge, in orde

In Films-list.com we have selected the most viewed movies from category - Comedy, Romance. Enjoy the best films specially selected for you! Vindaloo Empire (2011) is the right choice that will satisfy all your claims.