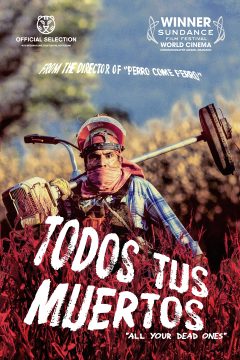 Description:
An ordinary farmer’s morning routine is interrupted when he makes a grim discovery in the middle of his cornfield – a pile of dead bodies. He reports the massacre on what happens to be Election Day and, fearful of unleashing a public scandal, the authorities stall and intimidate the farmer and his family. Meanwhile, the sun beats down and the eerie corpses remain, refusing to be ignored. All Your Dead Ones unspools a disquieting allegory, a silent indictment of Columbia’s ongoing civil war.

In Films-list.com we have selected the most viewed movies from category - BlackComedy. Enjoy the best films specially selected for you! Todos Tus Muertos (2011) is the right choice that will satisfy all your claims.