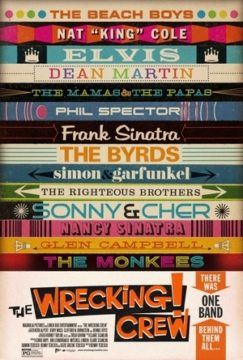 Description:
What the Funk Brothers did for Motown... The Wrecking Crew did, only bigger, for the West Coast Sound. Six years in a row in the 1960’s and early 1970’s, the Grammy for “Record of the Year” went to Wrecking Crew recordings. And now, THE WRECKING CREW tells the story in pictures and that oh, so glorious sound. The favorite songs of a generation are all here, presented by the people who made them for you. THE WRECKING CREW is a documentary film produced and directed by Denny Tedesco, son of legendary late Wre

In Films-list.com we have selected the most viewed movies from category - Documentary. Enjoy the best films specially selected for you! The Wrecking Crew! (2014) is the right choice that will satisfy all your claims.