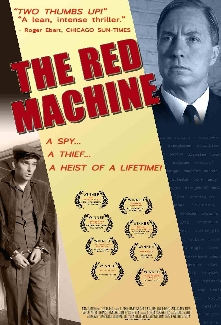 Description:
Washington, DC, 1935: At the height of the Great Depression, a charming and irrepressible young thief is forced to help an icy and mysterious United States Navy spy. The mission: to steal a brand new device that the Japanese military is using to encode its top-secret messages. The assignment is complicated by the spy's dark past in Tokyo and the two discover they are pawns in a larger game. Together, they devise an intricate but risky scheme to succeed in their mission and outwit the people trying to use th
Under 1M
Mill Valley Film Festival (world premiere) Edinburgh International Film Festival (international premiere) Toronto Independent Film Festival (opening night movie) Prescott Film Festival (opening night movie) Sedona International Film Festival

In Films-list.com we have selected the most viewed movies from category - Thriller. Enjoy the best films specially selected for you! The Red Machine (2009) is the right choice that will satisfy all your claims.