FILM REVIEW - The President is Coming 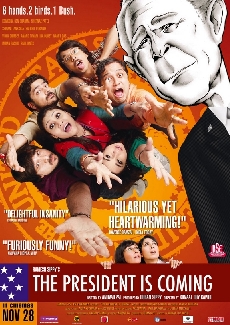 The President is Coming

Description:
In 2006, George Bush, President of The United States, visited India. In addition to the many diplomatic and political things on the agenda was a rather unique event - a meeting with one of the young faces responsible for shaping "The New India". This is a fact. The rest is fiction. The US Consulate hires a dysfunctional PR agency that "knows America" to find 1 young Indian to be the face of the New India before The American President. The agency brings in 6 Young Indians who have been selected by NDTV as th

In Films-list.com we have selected the most viewed movies from category - Comedy. Enjoy the best films specially selected for you! The President is Coming (2009) is the right choice that will satisfy all your claims.