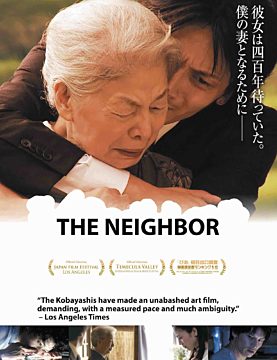 Description:
Shunsuke is a pessimistic young man who was orphaned as a child. One day, drawn to a mysterious song coming from the next-door apartment unit, he meets Setsu, an old woman who claims she has been waiting for 400 years to become his wife. Assuming she’s demented, he searches her background in hopes of finding someone to take custody of her. In the process, he comes to embrace her as the mother figure he had been longing & agrees to marry her. But when his workplace learns that the woman allegedly owns a

In Films-list.com we have selected the most viewed movies from category - Drama. Enjoy the best films specially selected for you! THE NEIGHBOR (2011) is the right choice that will satisfy all your claims.