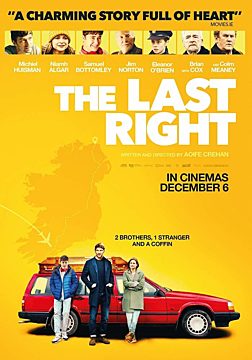 Description:
On the flight home to Ireland for his mother’s funeral, New York-based Irishman DANIEL MURPHY (Michiel Huisman) is shocked when the elderly passenger dies in the next seat, just after listing Daniel as his next-of-kin. Daniel, now sole guardian has to deal with his autistic brother, LOUIS, who refuses to return to New York with him. In a bid to persuade Louis, Daniel offers to drive Padraig’s remains across Ireland, from Cork to Rathlin Island with the funeral home temp, MARY in the passenger seat. Sparks i

In Films-list.com we have selected the most viewed movies from category - Comedy. Enjoy the best films specially selected for you! The Last Right (2019) is the right choice that will satisfy all your claims.