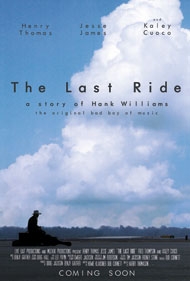 Description:
THE LAST RIDE: a story of Hank Williams

Before Elvis, before Johnny Lee Lewis, Buddy Holly, Johnny Cash, the first bad boy star of American Music was Hank Williams. He is now regarded as the greatest country music star of all time, and the grandfather of country-western.

The Last Ride recounts his last trip from Alabama to Ohio in December 1952.

In Films-list.com we have selected the most viewed movies from category - Drama, Road Movie, True Story. Enjoy the best films specially selected for you! The Last Ride (2011) is the right choice that will satisfy all your claims.