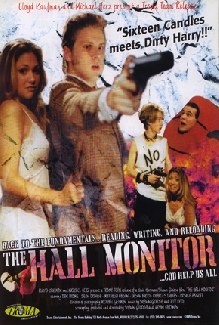 Description:
Sixteen Candles meets Dirty Harry. The Troma Team is proud to present The Hall Monitor. Dan Kashwood, the Hall Monitor of Rocky Mountain High School, maintains law and order with excessive force… and a .44 Magnum. But now, a mysterious student is killing the football team, one player at a time. It’s up to Dan to apprehend the murderer before the team ends up playing their next big game… at the morgue! Starring Dan Frome (Winner of the Silver Award for Acting at the Atlantic City Film Festival) and the incre

In Films-list.com we have selected the most viewed movies from category - Action/Adventure, Psycho-Drama. Enjoy the best films specially selected for you! The Hall Monitor (1999) is the right choice that will satisfy all your claims.