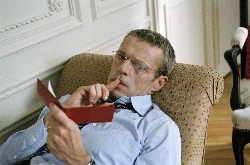 Description:
Pierre Collier is dead. Murdered in the residence of Senator Henri Pages during a holiday resort week-end. His wife, Claire, is the designated culprit. Undoubtedly, she had more than a goos reason to seek revenge on her cheating husband. Nevertheless, appearances can be indeed misleading. The weapon soon proves to be not that of the crime, and every guest suddenly becomes a potential suspect: Esther, PIerre's mistress Lea, the humiliated love of youth or Philippe, his arch rival. And why not the Senator him
5M-10M

In Films-list.com we have selected the most viewed movies from category - Drama. Enjoy the best films specially selected for you! THE GREAT ALIBI (2008) is the right choice that will satisfy all your claims.