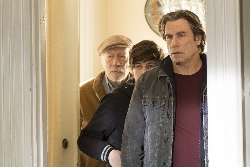 Description:
THE FORGER tells the story of a former child art prodigy and second generation petty thief, Ray Cutter (Travolta) who arranges to buy his way out of prison to spend time with his ailing son, Will Cutter (Sheridan). Ray and his father, Joseph Cutter (Plummer), must come together to carry out one last big job for the syndicate who financed his early release.
Toronto International Film Festival 2014

In Films-list.com we have selected the most viewed movies from category - Heist. Enjoy the best films specially selected for you! The Forger (2014) is the right choice that will satisfy all your claims.