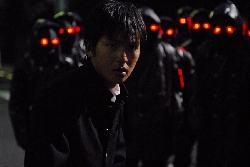 Description:
An odd murder case that only targets the person whose last name is ?SATO? was happening in Japan.
Meanwhile, high school student SATO Tsubasa winds up in a parallel world during a fight with gangster. Everything seemed the same, but his friends, classmates were somehow different from who they used to be.
Tsubasa could not comprehend what was happening around him, but when he sees a girl getting killed in front of him by a persuer, he finds out that he is now in a world where the Lord of the la

In Films-list.com we have selected the most viewed movies from category - Horror, Science-Fiction, Action/Adventure. Enjoy the best films specially selected for you! The Chasing World (2007) is the right choice that will satisfy all your claims.