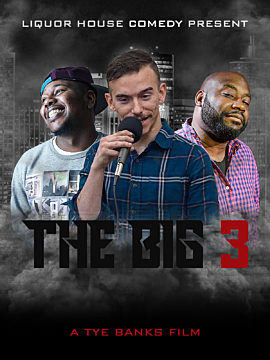 Description:
Liquor House Comedy presents the Big 3 featuring stand up comedians Brian Isley (New York's Apollo Theater) Bo Alambis and Ampston Hews. None of these three comedians are a like. They all bring a unique style of stand up comedy that's excellently displayed on stage. Brian Isley jokes about his family and being a celebrity look alike. Bo Alambis jokes about being raised in the south and become a southern man. While Ampston Hews tells hilarious stories of about his college life, and what he's learned about wo

In Films-list.com we have selected the most viewed movies from category - Comedy, Documentary. Enjoy the best films specially selected for you! The Big 3 (2019) is the right choice that will satisfy all your claims.