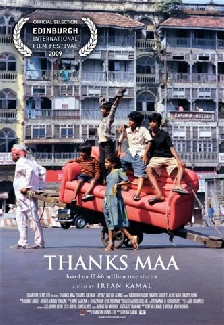 Description:
In the vein of Danny Boyle's "Slumdog Millionaire" and Mira Nair's "Salaam Bombay," Thanks Maa is poignant tale of a12 year old street kid named Municipality. While on the run from the reformatory, he finds & saves a two day old abandoned baby from becoming the prey to a ferocious street dog. Failing to find any takers among the people whom he deemed responsible and respectable, Municipality takes up the onus of finding the mother of that abandoned baby himself. Municipality's rock steady determination ulti
Edinburgh International Film Festival Montreal World Film Festival Pusan International Film Festival

In Films-list.com we have selected the most viewed movies from category - Drama. Enjoy the best films specially selected for you! Thanks Maa (2009) is the right choice that will satisfy all your claims.