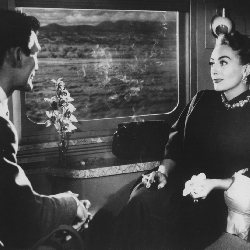 In this rediscovered masterpiece of film noir, Joan Crawford plays a successful playwright who marries a mediocre actor (Jack Palance). She soon discovers that he not only married her for money but that he plans to murder her with the help of his lover (Gloria Grahame).
2013 Official Selection Il Cinema Ritrovato.
Sudden Fear received Academy Award Nominations in 1952 for Charles Lang Jr (Best Black & White Cinematography), Joan Crawford (Best Actress), and Jack Palance (Best Supporting Actor). 1953 Laurel Awards - Best Dramatic Performance, Female

In Films-list.com we have selected the most viewed movies from category - Thriller. Enjoy the best films specially selected for you! Sudden Fear (1952) is the right choice that will satisfy all your claims.