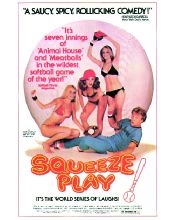 Description:
"Squeeze Play" is the first and most seminal of the sexy comedies of the late 70's. Before there was "Porky's," there was "Squeeze Play," a hilarious, raunchy comedy about a women's softball team where anything goes. It's a wild battle of the sexes as the "World Series of Laughs" heats up on and off the softball field. "Squeeze Play" stars Jennifer Hetrick ("L.A. Law"), Jim Metzler ("Four Friends") and Al Corley ("Dynasty").

In Films-list.com we have selected the most viewed movies from category - Comedy. Enjoy the best films specially selected for you! Squeez Play (1980) is the right choice that will satisfy all your claims.