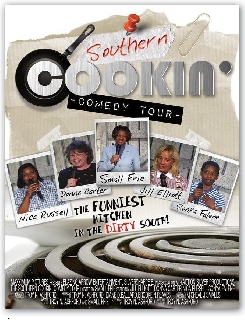 Description:
Southern Cookin Comedy Tour is a laugh out loud! concert film that has everyone that see's it in stitches! It features some of the best female comdians in the business. Hosted by Small Frie( HBO's Def Jam), with headliner Jill Elliott (The Famous Improv) and featuring Nica Russell (Comic View), Donna Carter (The Laugh Factory). Also newcomer and breast cancer survivor Sonya Falene. Filmed at the Historic Theatre on the Marietta Square in Atlanta,GA. They deliver a delightful dead-on performance with a suttl

In Films-list.com we have selected the most viewed movies from category - Comedy. Enjoy the best films specially selected for you! Southern Cookin Comedy Tour (2009) is the right choice that will satisfy all your claims.