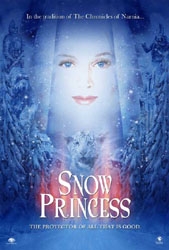 Description:
The SNOW PRINCESS is born from the magic of St. Elmo, ruler of the vast, polar lands. She is secretly raised as the daughter of Father Christmas and becomes the protector of all that is good. One day, after wandering beyond the wall of her sheltered world, she's captured by the evil Jack Frost. She is imprisoned in Ice City which is ruled by a wicked wizrad. Markos, the master of good magic, knows that only the SNOW PRINCESS has the power to save humanity. Now, he must reunite the Princess with a sacred gem
50M-100M
75%-51%

In Films-list.com we have selected the most viewed movies from category - Fantasy, Action/Adventure, Childrens. Enjoy the best films specially selected for you! SNOW PRINCESS (2009) is the right choice that will satisfy all your claims.