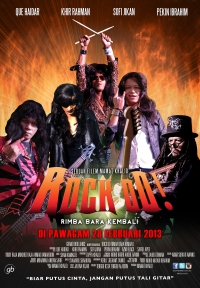 Description:
Sequel from 2005’s cult hit Rock, the story continues with Amy Mat Piah (Que Haidar), the ex-singer of Rimba Bara who is now a small-time vendor. However, he has never given up on his dreams of becoming a rock star. He manages to convince former members of Rimba Bara to regroup again and they set off to KL with renewed ambition and determination. But when their manager disappears, their vocalist jumps ship and they slowly run out of money, they will have to decide between staying and fighting for their drea

In Films-list.com we have selected the most viewed movies from category - Comedy, Musical. Enjoy the best films specially selected for you! Rock Oo (2012) is the right choice that will satisfy all your claims.