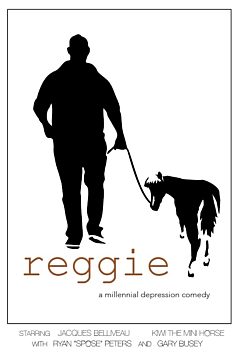 Description:
"Reggie" follows Mitch who, after yet another breakup, gets intervened on by his closest friends and steered towards therapy as an option to break his various self-sabotaging cycles. He agrees to try seeing a therapist but his problems with communication, fear, and overall stubbornness cause frustration to mount. So, he does what any logical man would do. While particularly frustrated in the waiting area pre-session, he sees a pamphlet for therapy animals and immediately leaves and adopts a miniature horse

In Films-list.com we have selected the most viewed movies from category - Comedy, Drama. Enjoy the best films specially selected for you! Reggie: A Millennial Depression Comedy (2020) is the right choice that will satisfy all your claims.