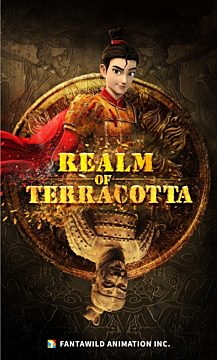 Description:
Terracotta warriors and Onyx creatures constantly wage war in the subterranean Qin Yang City. A young man named Magnus dreams of becoming an Elite Warrior. To do this, he sets out to capture an Onyx. On his quest, he meets a human girl named Jade hunting the same Onyx. They team up and gradually fall in love during their adventure. They learn the secret behind the monsters’ invasion, but it’s too late. The ultimate war has begun. Magnus and Jade have to figure out how to clear up the misunderstanding and ha

In Films-list.com we have selected the most viewed movies from category - Action/Adventure, Animation, Childrens, Family. Enjoy the best films specially selected for you! Realm Of Terracotta (2020) is the right choice that will satisfy all your claims.