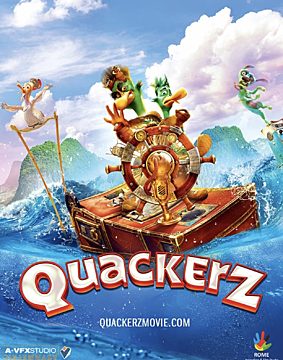 Description:
Many years ago, when the trees were tall, the old ducks had feathers on their heads, and the Sun shone for everybody alike, on a faraway island there lived a Sun Duck whom protected his flock from evil powers threatening from the outside. The Sun Duck had his loyal guardians who vigilantly supervised the territory and made sure the Sun evenly spread its energy on their flourishing land. The bliss continued until an Evil Which learned of the Sun Duck’s superpowers and lost her sleep in an attempt to enslave

In Films-list.com we have selected the most viewed movies from category - Animation, Childrens, Comedy, Family, Fantasy. Enjoy the best films specially selected for you! Quackerz (2016) is the right choice that will satisfy all your claims.