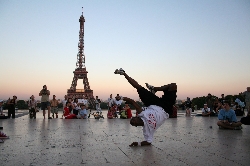 Description:
With compelling characters and vibrant dance sequences, PLANET B-BOY is set in the International world of b-boying � the urban dance more commonly known as �breakdancing.�

Weaving between the vivid backdrops of Osaka, Paris, Seoul and Las Vegas, unforgettable images frame the intimate stories of dancers who struggle for their dreams despite being misunderstood by larger society and even their own families.

In Films-list.com we have selected the most viewed movies from category - Documentary, Urban. Enjoy the best films specially selected for you! Planet B-boy (2007) is the right choice that will satisfy all your claims.