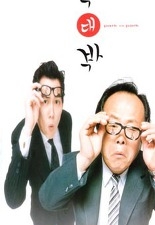 Description:
A father and son meet at the court as a judge and a lawyer. Park Soo Suk(Lee Jung Jae) is a successful lawyer, who had been only handling divorce cases that are guaranteed for good income. One day he is beaten up by a man who had been harmed because of his conceivable behavior at the court. After this happened, Soo Suk voluntarily takes a murder case in order to restore his spoiled image. At first he tries to convince the accused murderer to admit his sin, but the man consistently argues that he is innocent

In Films-list.com we have selected the most viewed movies from category - Comedy. Enjoy the best films specially selected for you! Park vs. Park (1997) is the right choice that will satisfy all your claims.