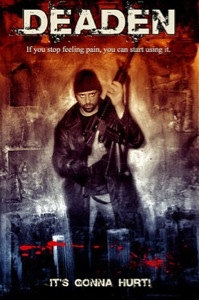 Description:
Ex-undercover cop turned biker Rane (John Fallon), witnesses the brutal murder of his pregnant wife Jamie (Anna Jaeger) by his crew who have learned about his old policemen days. Shot through the head with a crossbow and dumped into a canal, Rane is believed to be dead... but he miraculously survives the ordeal.Upon his exit from the hospital, he teams up with his old crime buddy Kersey (Deke Richards), arms himself to the teeth, and goes on a drug fueled, psychotic rampage... all in the name of unapologeti
Under 1M
Sitges International Film Festival 2006 Fantasia Film Festival 2007

In Films-list.com we have selected the most viewed movies from category - Action/Adventure. Enjoy the best films specially selected for you! Pain Killer (2006) is the right choice that will satisfy all your claims.