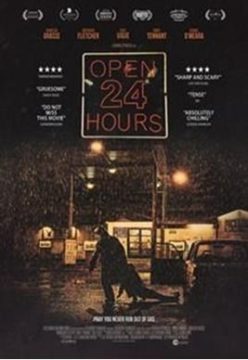 Description:
In the tradition of DON'T BREATHE and HOUSE OF THE DEVIL comes a elevated psychological horror film with a strong female protagonist that re-defines the genre for a new generation. Featuring an all-star cast headlined by Vanessa Grasse ("Texas Chainsaw Massacre" franchise reboot "Leatherface"), Brendan Fletcher ("Braven", "The Revenant") and Emily Tennant (Warner Brothers "Legends Of Tomorrow"). A paranoid delusional woman, Mary White (Vanessa Grasse), has just been released from a mental hospital for setti

In Films-list.com we have selected the most viewed movies from category - Action/Adventure, Horror, Thriller. Enjoy the best films specially selected for you! OPEN 24 HOURS (2019) is the right choice that will satisfy all your claims.