FILM REVIEW - One Word From You 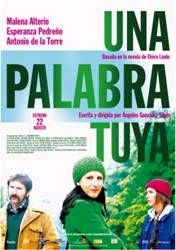 One Word From You

Description:
One Word from You is a portrait of Rosario and Milagros, a look at the lives of two ordinary people who, after years of pitfalls, dashed illusions, fear and harsh realities, have come to fear that happiness is something they do not deserve. In the company of Morsa, the two friends tread two quite engaging paths: one, from the strong zeal for life to the most cruel extremes of nothingness the other, from a redeemed life to a future of hope and expectations. In the middle of the two paths, forgiveness …
1M-3M

In Films-list.com we have selected the most viewed movies from category - Drama. Enjoy the best films specially selected for you! One Word From You (2008) is the right choice that will satisfy all your claims.