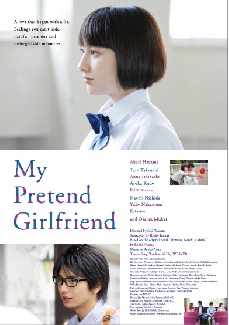 Description:
Since entering high school, Noboru Aihara (Takeuchi) has gone mostly unnoticed by his peers. One day, a friendly senior student called Shun Miyazaki (Asuka Kudo) calls him over and introduces him to Yo Momose (Hayami), a student from a neighboring class, then makes a strange request. In order to quell a rapidly spreading rumor that Shun has become romantically involved with Momose despite going out with Tetsuko Kanbayashi (Anna Ishibashi), one of the most popular girls in school, he asks Noboru to pretend t

In Films-list.com we have selected the most viewed movies from category - Drama. Enjoy the best films specially selected for you! My Pretend Girlfriend (2014) is the right choice that will satisfy all your claims.