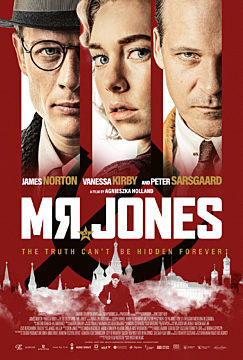 Description:
Agnieszka Holland’s thriller, set on the eve of world WWII, sees Hitler’s rise to power and Stalin’s Soviet propaganda machine pushing their “utopia” to the Western world. Meanwhile an ambitious young journalist, Gareth Jones (Norton) travels to Moscow to uncover the truth behind the propaganda, but then gets a tip that could expose an international conspiracy, one that could cost him and his informant their lives. Jones goes on a life-or-death journey to uncover the truth behind the façade that would later

In Films-list.com we have selected the most viewed movies from category - Biography, Drama, Thriller. Enjoy the best films specially selected for you! Mr. Jones (2020) is the right choice that will satisfy all your claims.