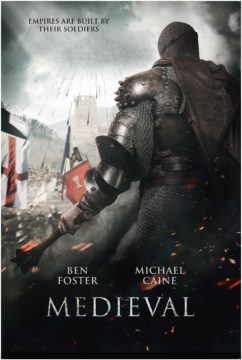 Description:
Set in 14th Century Prague, the Holy Roman Empire is plummeting into chaos after the death of its reigning emperor while brothers King Wencelas of Czech and King Sigismund of Hungary battle for control of the empty throne. Handsome, righteous mercenary leader Jan Zizka (Ben Foster) is hired by Lord Boresh (Michael Caine) to kidnap the powerful Lord Rosenberg’s (Til Schweiger) fiancée, Katherine (Sophie Lowe), in an attempt to prevent Rosenberg’s rise to power alongside Sigismund and ultimately foil Sigismun

In Films-list.com we have selected the most viewed movies from category - . Enjoy the best films specially selected for you! Medieval (2019) is the right choice that will satisfy all your claims.