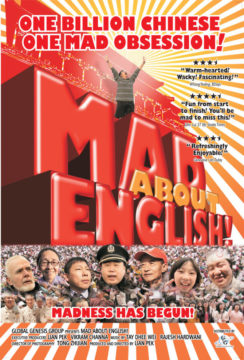 Description:
Having won the bid to the Olympics, China began an extensive foray of preparation to usher the new found glory of welcoming international guests to their land. Having built massive architectural marvels like the National Aquatics Center (Water Cube) and the National Stadium (Bird's Nest), one major hurdle faced the majority of its population: language. What is a host to do if they con't communicate with their own guests? Hence a major sweep of English madness was entrusted upon the people with hilarity ensu

In Films-list.com we have selected the most viewed movies from category - Documentary. Enjoy the best films specially selected for you! MAD ABOUT ENGLISH (2007) is the right choice that will satisfy all your claims.