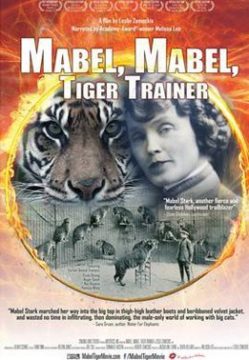 Description:
Written & Directed by Award-winning documentary filmmaker Leslie Zemeckis ("Behind the Burly Q", "Bound by flesh"), MABEL, MABEL, TIGER TRAINER is the empowering life story of the world's first female tiger trainer, Mabel Stark. From rural poverty in Kentucky, to Mistress of the Tigers in the star role of the national Ringling Bros Circus, Mabel Stark was a pivotal figure in 19th Century Americana entertainment. Stark survived multiple tiger maulings, overcame the notion that women were not allowed nor

In Films-list.com we have selected the most viewed movies from category - Documentary. Enjoy the best films specially selected for you! Mabel Mabel, Tiger Trainer (2016) is the right choice that will satisfy all your claims.