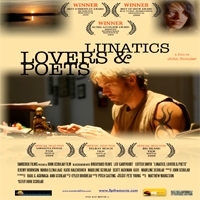 Description:
Scottish-Catholic and hard drinking, a struggling novelist finds himself broke, broken, and haunted by the very thing he is writing about. On the verge of self-destruction, he will have to confront his estranged, lunatic, alcoholic father who is now living in a Shakespearean Play. His girlfriend Maria is leaving him for another woman, and his cousin Micky is about to move out and get married. If he can just finish his story, he may put to rest a secret from his childhood and find redemption.
Under 1M
"BEST SCREENPLAY" THE METHOD FEST INDEPENDENT FILM FESTIVAL 2009 "ALOHA ACCOLADE AWARD" HONOLULU INTERNATIONAL FILM FESTIVAL 2009 "BEST OF SHOW" REAL TO REEL FILM 2009

In Films-list.com we have selected the most viewed movies from category - Drama, Romance. Enjoy the best films specially selected for you! Lunatics Lovers and Poets (2009) is the right choice that will satisfy all your claims.