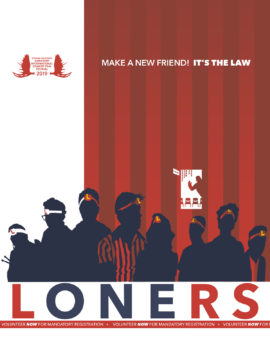 Description:
A satire about an ensemble of eccentric loners caught in the middle of "The War on Loneliness", a program created by politicians to stem the growing tide of violence. Forced to endure a government-mandated group therapy class called "Lone-Anon", they are lead by a well-meaning but ineffectual therapist whose exercises become increasingly comical and unhelpful. As the loners are thrust into a government- created conspiracy to justify its failing program, they must figure out how to avoid being yet another in

In Films-list.com we have selected the most viewed movies from category - Comedy. Enjoy the best films specially selected for you! Loners (2019) is the right choice that will satisfy all your claims.