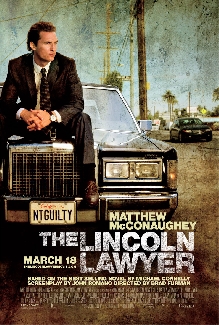 Description:
Mickey Haller (Matthew McConaughey) is a Los Angeles criminal defense attorney who operates out of the back of his Lincoln Continental sedan. Haller has spent most of his career defending garden-variety criminals, until he lands the case of a lifetime: defending a Beverly Hills playboy accused of murder. But the seemingly straightforward case suddenly develops into a deadly game of survival for Haller.

In Films-list.com we have selected the most viewed movies from category - Drama. Enjoy the best films specially selected for you! Lincoln Lawyer (2010) is the right choice that will satisfy all your claims.