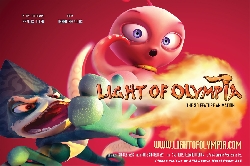 Description:
What do a bronze donkey, a witch doctor, demi-gods, a princess and a torch all have in common? They're all going to the Olympic games!

But, they're not just going for the gold. This game is for keeps. The champion of this deadly game takes the kingdom and rules the ancient world. Find out if an idealistic donkey (played by Phyllis Diller) can vanquish a magical menace, powerful demons and his own amnesia to save the world and win the girl -- who thinks he's nice and all -- but, well he's a donk
3M-5M
99%-76%

In Films-list.com we have selected the most viewed movies from category - Animation, Action/Adventure, Comedy. Enjoy the best films specially selected for you! Light of Olympia (2008) is the right choice that will satisfy all your claims.