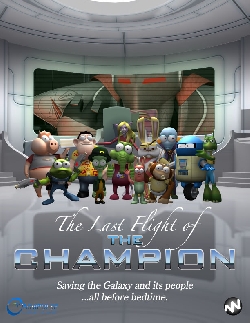 Last Flight of The Champion

Description:
General Disdain is enslaving the people of the galaxy, one planet at a time. Everywhere citizens are being asked to join the flight but when Neddy a young Turtelian tries to enlist he's told "Your just too small." So Neddy and his friends decide to form their own army, and take the fight to Disdain.
1M-3M

In Films-list.com we have selected the most viewed movies from category - Animation, Family, Science-Fiction. Enjoy the best films specially selected for you! Last Flight of The Champion (2012) is the right choice that will satisfy all your claims.