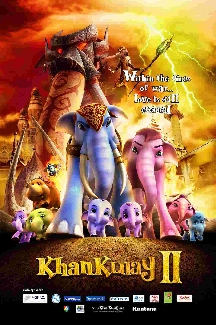 Description:
After the end of a renowned elephant battle, Khan Kluay has created a glorious biography of his own as a majestic elephant of King Naresuan the Great. He was named Chao Phraya Prap Hongsawadee (Lord Tamer of Hongsawadee). Due to his important duty as royal elephant, he doesn't have enough time now for everyone as he used to in the past. This wouldn't be a problem if it was not for Shaba Kaew, his beloved one who keeps a secret untold that she is now pregnant and intends to deliver her baby there. Unexpected

In Films-list.com we have selected the most viewed movies from category - Animation. Enjoy the best films specially selected for you! Khan Kluay 2 (2009) is the right choice that will satisfy all your claims.