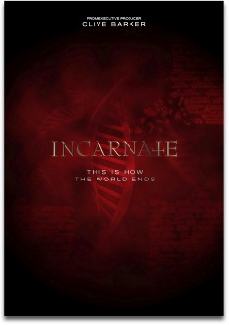 Description:
A series of mysterious and unexplained phenomena are starting to take place... On this day, science journalist Susan Foster decides to end her life rather than face the reality of the news she has just received, that she has been diagnosed with terminal cancer. But before she can take action, she is asked by Francis Panati, a Jesuit scholar, to investigate a shocking claim: Eighteen years ago an unknown number of clones were created from genetic material taken from a priest possessed by a demonic entity. Jo
From one of the biggest names in the supernatural-thriller and horror genre, comes INCARNATE a new series that pushes limits in all directions - with compelling characters, shocking story lines, and unprecedented cinematic visuals. Executive Producer Clive Barker describes it as "X-Men meets The Exorcist", in a modern-day hour drama series about a force of evil, living in our midst - and three unlikely heroes who must work together to stop it.

In Films-list.com we have selected the most viewed movies from category - Supernatural Thriller, Thriller. Enjoy the best films specially selected for you! Incarnate (2016) is the right choice that will satisfy all your claims.