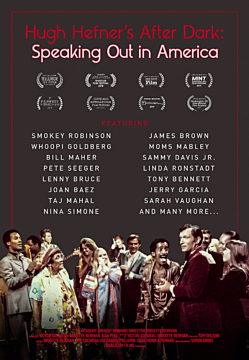 Description:
The freedom to speak out, to freely express one’s individual ideas, and to be accepted for being different resonates at the heart of Hugh Hefner’s After Dark: Speaking Out in America – a documentary that features the most cutting-edge personalities, open and frank dialogue about pressing social concerns, and the most captivating performances from Hugh Hefner’s landmark TV series, Playboy’s Penthouse (one season, 1959-1960) and Playboy After Dark (two seasons, 1968

In Films-list.com we have selected the most viewed movies from category - Documentary. Enjoy the best films specially selected for you! Hugh Hefner's After Dark : Speaking out America (2018) is the right choice that will satisfy all your claims.