FILM REVIEW - How to Meet Girls from a Distance 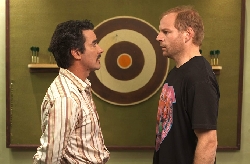 How to Meet Girls from a Distance

Description:
Toby has always been unlucky with girls. Ever since getting stabbed in the throat after asking a girl out in a café, Toby has resolved to learn everything he can about girls before meeting them, so he can become the man of their dreams. After faking yet another girlfriend, his poor mother takes matters into her own hands and signs him up with a dating coach, Carl Stewart BA, with his unique methods and philosophies. But Toby has finally found Phoebe and he thinks she’s the girl of his dreams. She’s intellig
Under 1M
NZ International Film Festival 2012

In Films-list.com we have selected the most viewed movies from category - Comedy. Enjoy the best films specially selected for you! How to Meet Girls from a Distance (2012) is the right choice that will satisfy all your claims.