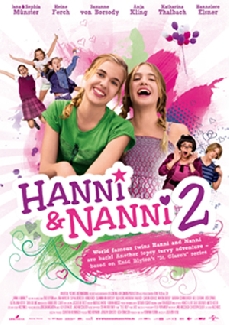 Description:
Another topsy-turvy adventure for the famous twins: First Madame Bertoux has to fill in for the principal at short notice, but soon finds she’s in over her head dealing with the school and her nephew Philippe, who’s also a guest at the boarding school. The twins also have their bothersome cousin Lilly on their hands, who’s new in their class. And Lilly isn’t the only new addition: A “real princess” is supposed to join them, whose identity is kept a secret.
As if they didn’t have enough to deal with, t

In Films-list.com we have selected the most viewed movies from category - Family, Comedy. Enjoy the best films specially selected for you! Hanni & Nanni 2 (2012) is the right choice that will satisfy all your claims.