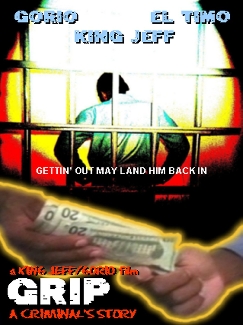 Description:
GRIP: A CRIMINAL’S STORY is an urban drama about an ex-con, Grip, who struggles to make an honest living in society after serving 4 years in prison for drug possession. After an unsuccessful attempt at the straight life, he must return to the world of drugs and thugs he left behind, headed by his slyly elusive brother Maurice. Other characters include Grip’s ex-girlfriend Gwen, who has lost all hope that Grip will ever honestly provide for her and their daughter…Deon, Gwen’s ex-drug dealing brother, now tur
Under 1M
Various over the years

In Films-list.com we have selected the most viewed movies from category - Urban, Drama, Suspense. Enjoy the best films specially selected for you! Grip: A Criminal's Story (2007) is the right choice that will satisfy all your claims.