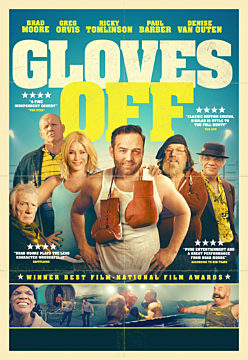 Description:
A feel good high jinks British comedy about a group of misfit underdogs attempting to save their beloved boxing gym. Doug (Brad Moore) has definitely seen better days. Following his boxing trainer’s sudden death during his championship fight, he has inherited a crumbling debt-ridden gym, packed full with a mixed bag of crazy would-be pugilists (Ricky Tomlinson, Paul Barber, Alexei Sayle). With the banks closing in, Doug must raise £50,000 fast or risk watching his mentor’s legacy re- possessed and transform

In Films-list.com we have selected the most viewed movies from category - Comedy, Drama, Family. Enjoy the best films specially selected for you! Gloves Off (2018) is the right choice that will satisfy all your claims.