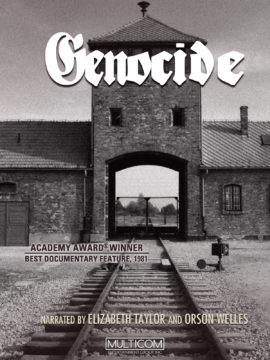 Description:
With the rise of Hitler and the Nazi Party, more than 6 million Jews lost their lives. Arnold Schwartzman and the Simon Wiesenthal Center take a harrowing look at life during the Holocaust in this Academy Award-winning documentary.  Orson Welles and Elizabeth Taylor lend their voices to this heartbreaking historical account.

In Films-list.com we have selected the most viewed movies from category - Documentary, Drama, Historical. Enjoy the best films specially selected for you! Genocide (1982) is the right choice that will satisfy all your claims.