FILM REVIEW - From Russia To Hollywood 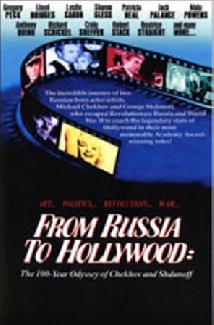 From Russia To Hollywood

Description:
From Czarist Russia's Moscow Art Theatre to Hollywood's biggest film, narrator Gregory Peck joins an A-list of Hollywood stars to take us through the odyssey of two Russian born Hollywood legends: The great acting teacher Michael Chekhov and the amazing director George Shdanoff. With actors Anthony Quinn, Lloyd Bridges, Robert Stack, Jack Palance, Patricia Neal, Mala Powers and many more – we follow the lives of those who made Hollywood what it is today.

In Films-list.com we have selected the most viewed movies from category - Documentary, Biography, Historical. Enjoy the best films specially selected for you! From Russia To Hollywood (2002) is the right choice that will satisfy all your claims.