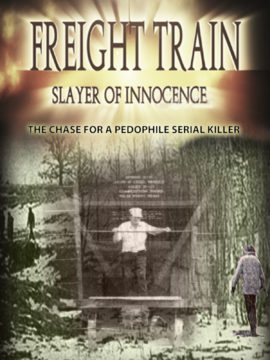 Description:
During the 1970's several young boys disappeared from State and County Fairs, FFA Fairs and carnivals throughout the Midwest and disappeared forever or were found murdered. In 1979, I, Jim Conover, headed up an investigation into these crimes. During our investigation, we discovered some 16 young boys were either murdered or disappeared in 7 states . We developed one suspect who was in almost every town at the time. William "Freight Train" Guatney was a hobo who traveled the country from coast to coast via

In Films-list.com we have selected the most viewed movies from category - TrueStory. Enjoy the best films specially selected for you! Freight Train: Slayer of Innocence (2017) is the right choice that will satisfy all your claims.