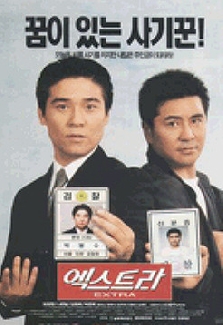 Description:
Bong Soo Park and Wang Ki Kim are so called ‘actors’ or rather, ‘extras’, who fuss over minor roles. Though they sleep in the props storage and borrow money from their girlfriends, they never break down. They trust the day will come when they defeat Sung Ki Ahn and Min Soo Choi and carry Bora Kang and Jinsil Choi in their arms. But reality is cruel. There was a big wall in front of these guys who were ready to run to the end of the earth for a scene. It was shooting phobia. They roam around the surroundings

In Films-list.com we have selected the most viewed movies from category - Comedy, Action/Adventure, Drama. Enjoy the best films specially selected for you! Extra (1998) is the right choice that will satisfy all your claims.