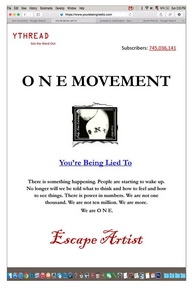 Description:
A socially and politically frustrated young man with a troubled past vents his frustrations through a social networking website and unwittingly sparks a revolutionary social movement. ESCAPE ARTIST is a unique feature film and transmedia project which blends cinema, music video, live performance, new media, social networking, audience participation and reality. With a wide appeal to the troubled and confused 'subculture' of a disenfranchised generation, the fusion of these elements will take cinema to an en

In Films-list.com we have selected the most viewed movies from category - Drama. Enjoy the best films specially selected for you! Escape Artist (2015) is the right choice that will satisfy all your claims.